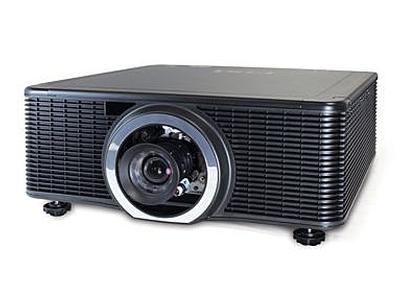 Rancho Santa Margarita, CA – November 2017… Eiki International, Inc. a world leader for over 40 years in projection technology, announces the new EK-820U WUXGA (1920x1200) Laser Projector. Featuring 10,000 Lumen brightness, a 100,000:1 contrast ratio, and the superior color performance resulting from the use of both blue and red lasers, the EK-820U supports versatile LAN control and carries the added benefits of a sealed optical engine design (IP6X) that provides protection against dust without using a filter design. The result is a projector that delivers superior brightness and clarity in a cost-effective package that redefines value for professional large venue installations and rentals.

Among the numerous features, the new EK-820U Laser Projector delivers stunningly vivid colors because of its use of both blue and red lasers. Compared to more traditional laser-based projection systems that incorporate a blue laser only, the addition of the red laser results in greater brightness (10,000 Lumen with a 16:10 aspect ratio), a higher red color ratio without diminishing either blue or green performance, and increased Gamut Area Ratio performance. Given that laser technology is less fragile than traditional lamp-based systems and offers nearly instant on/off performance, the capabilities of the new EK-820U make this projector an exceptional choice for applications where superior image quality is essential.

The new Eiki EK-820U Laser Projector provides a wealth of connectivity options that result in greater flexibility in terms of both signal access and control. For access on a LAN (Local Area Network), these systems provide RJ-45 connectors for both HDBaseT and Ethernet. The projector also provides support for RS-232 control as well as an input for a dedicated wired IR (infrared) remote. Equally notable, the projector includes both USB Type A and B connectors—enabling it to operate over the network using a Wi-Fi dongle. Additional connectivity for the Eiki EK-820U includes both HDMI™ input and output, HD-SDI, a DVI-D connector, and VGA I/O.

Of particular note, the new Eiki EK-820U Laser Projector caries an IP6X Dust Ingress Test rating. Given that many projectors are suspended, for example, from the ceiling and, as a result, are difficult to access for regular cleaning, the projector’s sealed optical engine, dust-free design ensures it will deliver exceptional performance and equally impressive long-term reliability. Its laser light source is rated for 20,000 hours.

Steve Rubery, Eiki's Director of Sales, commented on the company’s new EK-820U Laser Projector. “Eiki’s EK-820U offers exceptional performance, a rich feature set, and superior connectivity options. The EK-820U uses a 0.67-inch digital micro-mirror device (DMD) imaging system that contributes to the projector’s vivid colors and superior clarity. And since lasers create the exact colors that are required without having to absorb or otherwise block white light, system efficiency is considerably greater. I’m confident integrators and rental staging providers will find much to like in this new product offering.”

The EIKI EK-820U Laser Projector caries an MSRP of $19,995 w/o lens. The product will be available 1st week of December.