You are here: Home | News | Eiki Projectors Bring Drawings to Life in the Center for Puppetry Arts Production of “Harold and the Purple Crayon”
Search 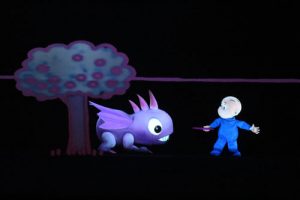 Atlanta, GA – July 2019... Presented by the Center for Puppetry Arts from April 3rd through May 26th, Harold and the Purple Crayon is a story about a curious young boy who has the power to create anything he can imagine, simply by drawing it with his oversized purple crayon. The show takes advantage of Pepper’s Ghost effect, which is an illusion technique used in the theatre, amusement parks, museums, television, and concerts. And to create the Pepper’s Ghost effect, two EK-612X projectors with AH-A22020 lenses from Eiki International Inc. of Rancho Santa Margarita, CA were utilized.

The Center for Puppetry Arts is the largest nonprofit organization in the country dedicated to puppetry. The Center’s mission is to inspire imagination, education, and community through the global art of puppetry. Gregory Montague, Production Manager at the Center for Puppetry Arts, discussed Harold and the Purple Crayon and his experience using the Eiki EK-612X projectors.

“Combined with blacklight puppetry, the Pepper’s Ghost effect enabled our production team to make Harold’s drawings come alive on stage in full view of the audience,” Montague explained. “Because the illusion allows images to appear on stage beside Harold, he is able to draw his entire world out of thin air. He draws everything from the ground, the moon, a castle, sidekicks, and even a dragon to guard his apple tree.”

Montague described how Pepper’s Ghost effect is achieved, “The Pepper’s Ghost effect works by placing a thin reflective transparent foil at a 45-degree angle between the audience and the puppets on stage. A video image is then projected onto a video screen below the foil and the reflection of that image is bounced off the foil for the audience to see. The illusion created makes it appear as if the image is onstage with the puppets. To accomplish this, the two Eiki projectors were set-up in an edge blend configuration to generate a single, wide video image.”

To accomplish the Pepper’s Ghost effect, the projectors required lenses with the correct throw, high light output capability, and they needed to be HDbaseT capable to ensure proper control. The Eiki EK-612X projectors with the AH-A22020 lenses met these requirements, as Montague described. “The Pepper’s Ghost Effect set-up placed a number of constraints on the projecting equipment,” he said. “Some could be corrected digitally before the projectors, but not all. The set-up gave us limited options on where the projector could be mounted, but the four-direction lens shift found on the EK-612X, its keystone correction, and most importantly, interchangeable lens, enabled us to overcome that obstacle.”

“The next challenge was light output, because the audience is only seeing a reflection of the image,” Montague continued. “They are seeing something that is approximately 50% - 70% dimmer than the actual image on the screen. As a result, we needed a high output unit and, by doing edge blending, we were able to make two Eiki 7K projectors give us the same output as a 14K unit over the same area. Equally important, we needed quality projectors that could do this and still be affordable—and the Eiki projectors made that a reality.”

Nearly 20,000 audience members experienced Harold and the Purple Crayon during its 8 week run. During that time, the Center for Puppetry Arts received many positive responses to the magic of both the show and the use of Pepper’s Ghost effect. Edward McNally of Atlanta’s Creative Loafing wrote, “The entire effect is wonderful, whimsical, liberating, and genuinely comforting.”

Montague summed up his experience working on Harold and the Purple Crayon with these final thoughts, “Because the Center for Puppetry Arts’ production team approaches each new project with the goal of honoring the source material as meticulously as possible, they are often presented with a unique set of design challenges and opportunities. For Harold and the Purple Crayon, those challenges were multi-layered. The solutions required the institutional knowledge to know about an ancient theatrical technique, the curiosity to do the R&D and experiment with a new type of foil surface for projections, and the tenacity to work with a palette (purple) that is arguably one of the most difficult to use in black light puppetry. All of this effort—combined with the capabilities of the two Eiki EK-612X projectors—resulted in a product that everyone was proud to put on stage.”

To learn more about the Center for Puppetry Arts, visit their website at www.puppet.org. The Eiki projectors used on this project were sold through Peachstate Audio & Lighting of Sugar Hill, GA. Visit the company online at www.peachstateaudio.com